We'll be back after this brief message...

The Kindle edition of my debut thriller Pocket-47 is now only $1.99! 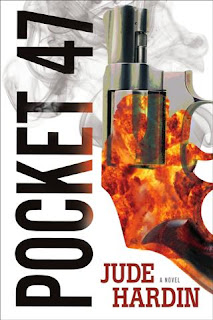 Rule #2 in private investigator Nicholas Colt’s Philosophy of Life: If you have a good Tuesday, Wednesday is likely to be a bitch.

Fifteen-year-old Brittney Ryan has taken to the streets. Colt is hired to find her and bring her home.

Piece of cake, he thinks. A surprise visit to the forbidden boyfriend should put this one in the scrapbook.

But something more sinister is behind Brittney’s disappearance, and Colt soon finds himself in an ever-widening maze of deceit, betrayal, and murder.

And, when he learns what the mysterious phrase Pocket-47 means, he is haunted even more by the plane crash that killed his family and rock band twenty years ago--a crash he now realizes might not have been an accident.

Colt is determined to save Brittney and untangle the threads of his own tortured past.

Unfortunately, one of the most heinous and violent criminals in modern history has other ideas.

Please send the jpg of your cover (only one, please) as an email attachment to judehardin at yahoo dot com.

Covers will be posted in the order they are received, one per day as time allows. No exceptions! Please don't request a specific date, or submit and withdraw multiple times in order to try to get a certain date, or send emails asking where we are on the queue. All such submissions/emails will be deleted unanswered. If you want to submit more than one cover for review, please space the submissions at least four weeks apart.

In the comments section, post what genre you think the book falls into, and then offer some ideas about what works and what doesn't. Be honest, but be constructive. Have fun!